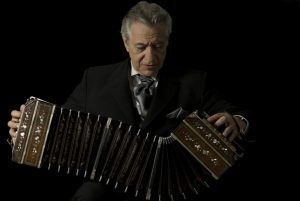 Raul Jaurena, master of the Tango, is among today’s most prominent bandoneon players. His music plays a very personal tribute to the influences of his native South America and his adopted hometown of New York. It combines the traditional roots of tango and the style of “Tango Nuevo” influenced by Astor Piazzolla.

The bandoneon has influenced Jaurena’s life right from the cradle. He was raised in Uruguay and his father taught him how to play the bandoneon, at the age of eight he already joined a tango orchestra and the fascination for this highly emotional music hasn't let go of him ever since. Mr. Jaurena lays the tracks for his musical career  by becoming member of various world renowned tango-ensembles during the 1960’s and 1970’s in Uruguay, Argentina ,Brasil, Chile, Ecuador and Venezuela. A special performance he played with Astor Piazzolla at the Montreal Jazz Festival turns out to be the guide for his professional development. The conservation on the musical spirit of Astor Piazzolla becomes his personal vocation: “Jaurena creates tango interpretations which are enriched by influences of jazz, his own arrangements and spontaneous improvisations, his music fascinate a new generation of listeners and dancers”. His arrangements and his skills as both composer and soloist make him equally popular both in the USA and in Europe.
Mr. Jaurena was invited to play at the White House and received a Grammy nomination for his CD “Tango Bar”. In 2007 he won the LATIN GRAMMY in the category best Tango Album for his CD "Te amo Tango".

Over the years Mr. Jaurena was involved as musical director in many stage projects and among other things he plays guest performances at the Thalia Spanish Theatre in New York. He collaborated with many acclaimed musicians such as Paquito D'Rivera, Yo Yo Ma, Giora Feidman, Tango Five and others. As soloist he played with prominent ensembles and  orchestras throughout Europe and also performed regularly in a series of programs including Klezmer and Tango Music. His show Tango & Tango had great success at the Ravinia Festival in Chicago.

Raul Jaurena – the man that Astor Piazzolla once called one of the greatest bandoneon players ever – has established a unique connection to his instrument: Genuine, open, touching, with stunning ​technical brilliance his play has enriched and added an important facet to modern tango interpretation.