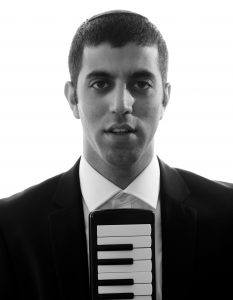 Orian Shukron, composer, pianist, conductor and arranger, has established himself as one of Israel's most prolific young and multi-disciplinary musicians. He performs a combination of his original works, classical music, jazz standards, Andalusian music and Klezmer with Middle Eastern influences. Winner of the 2017 Jerusalem Academy of Music and Dance “Presidential Award”, Mr. Shukrun serves as musical director and conductor of the Andalusian Orchestra Almograbia.
Recent years engagements include performing with the Israel Philharmonic Orchestra in special concert series based on Jewish music and concerts with the Andalusian Israeli Orchestra in Ashdod, for which he wrote an original piece "Tushia El Maghrabia" for piano and orchestra. The performance of the piece was very successful and received wonderful critic.

Mr. Shukron is a member and arranger of the “Milky Way” Ensemble and teaching artist in the Culture Lab "Kol Yotzer" at his hometown Maalot Tarshiha.
As a pianist and composer, Orian appeared in Israel, South Africa, Europe and the United States in various concerts. In 2012, he was invited to playa concert tour across England and also recorded for BBC 3 Radio .
Since 2011, Shukron participated as both PIanist and composer at the International Klezmer Festival in Jerusalem, and his works are performed by leading musicians such as Maestro Giora Feidman, Prof. Caroline Hartig and the jazz ensemble ZIZAL.