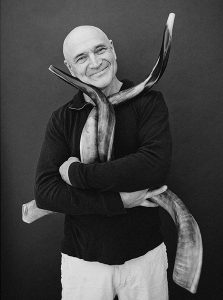 Boris Sichon was born in the Ukraine, where he graduated performing arts high School studying percussion. He left his hometown to continue his musical education at the St.Petersburg Academy of Music. During his studies he played with the St. Petersburg Symphony Orchestra, where he worked with well known conductors such as Yevgeny Mravinsky, Shostakovich, Badchan, Karapetian and many others.

After his graduation Boris was invited to join the Jewish chamber musical theatre in Moscow where he worked for 6 years as both stage musician and actor.  Right after he worked for 5 years with the Russian National Folkloric Band as stage musician, dancer, and singer. During that time he had an opportunity to visit and perform in 25 different countries, on 5 different continents. While traveling the world, Boris also started to collect traditional local instruments and learned to play those instruments with well known native musicians.

From 1990 onwards Boris had been working with the Footsbarn Travelling Theatre (France) as both musician and actor. He went travelling, collecting instruments, and rare and valuable musical information with the Theatre Company.  He then spent 5 years in Israel, working with Habima National Theatre, teaching at the Jerusalem Academy of Music and Dance, writing music for films and plays, as well as performing throughout the country.